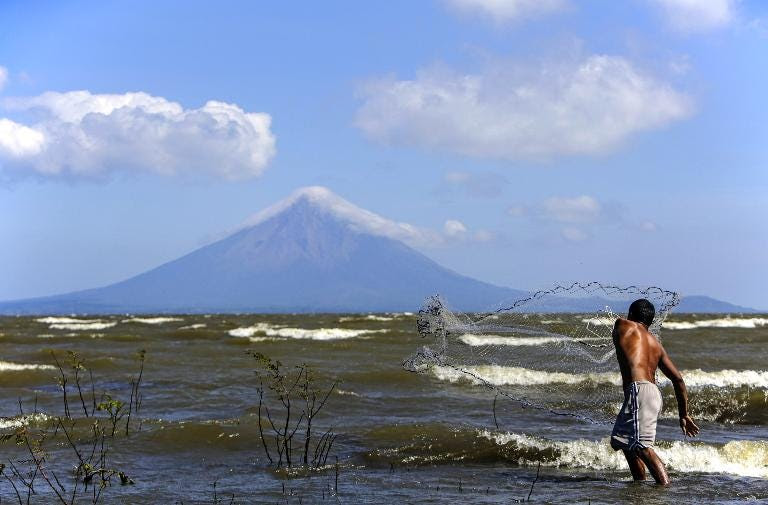 © AFP/File Inti OconA man fishes with a net off the shore of Cocibolca lake in Rivas, Nicaragua on December 11, 2014. The inhabitants of the area are against the construction of an inter-oceanic canal
Managua (AFP) - A Chinese company breaks ground Monday on a $50 billion canal across Nicaragua, an ambitious rival to the Panama Canal that critics condemn as a pipe dream and protesters say will wreck the environment.
President Daniel Ortega and the Chinese telecoms magnate behind the canal, Wang Jing, will inaugurate the project at an evening ceremony in the capital Managua.
But the actual construction will begin some 130 kilometers (80 miles) away, with the first access roads at the mouth of the Brito River on the Central American country's Pacific coast.
Wang's Hong Kong Nicaragua Development Investment (HKND) firm says 300 workers will build the roads and a port, the first of 50,000 people who will be hired to construct the massive 280-kilometer waterway connecting the Pacific Ocean and the Caribbean Sea.
The firm estimates the project will take five years.
That is half the time it took the United States to complete the Panama Canal 100 years ago, considered one of the greatest engineering triumphs of the 20th century.
Nicaragua, which fought Panama then to host the first canal across Central America, has now reemerged as a modern-day rival.
Panama earns about $1 billion a year -- six percent of its economy -- off its canal, which spans 80 kilometers.
Ortega, the leftist president who has ruled Nicaragua for 18 of the past 35 years, hopes the project will make his country the richest in Central America.
"On December 22, what has been a century-long dream for many generations in Nicaragua starts to become a reality," said Telemaco Talavera, spokesman for the country's Canal Commission and HKND.
The canal route crosses Lake Nicaragua, the largest freshwater reserve in Central America, then runs through rainforest and at least 40 villages before terminating at the mouth of the Punta Gorda River in the southern Caribbean, where another port will be built.
Both ports and the canal will be designed to handle the modern mega-ships favored by global shipping firms, which can carry up to 25,000 containers.
That dwarfs the current capacity of the Panama Canal to the south, which can only handle ships carrying 5,000 containers.
Even after completion of an ongoing $5.25 billion project to upgrade the Panama Canal with a new set of locks -- scheduled to be finished in early 2016, after a series of delays and a dispute over cost overruns -- the century-old waterway will only be able to handle ships carrying up to 12,000 containers.
The Nicaragua project also includes construction of an international airport and a free-trade zone with residential and tourism facilities.
- Secrecy and protests -
Nicaragua has kept the canal's technical, environmental and financial studies secret.
Environmentalists warn the canal could destroy sensitive habitats and cloud Lake Nicaragua's waters.
Three billion cubic meters (106 billion cubic feet) of earth will have to be excavated for the canal, which will be between 230 and 520 meters wide (750-1,700 feet) and 30 meters deep, allowing it to handle ships of up to 400,000 tonnes.
That threatens local wildlife, including sea turtles, activists warn, while scientists say the area is susceptible to earthquakes.
The project will also displace 30,000 farmers and indigenous people from the Rama and Nahua ethnic groups who live along the canal route.
Thousands of them have marched against the canal in the past three months, rejecting the "10 hens and a rooster" that community leader Octavio Ortega told AFP the government offered them in exchange for dropping their protests.
Last week, hundreds of farmers protested against the presence of army soldiers sent to southern Nicaragua to escort Chinese workers.
The contract conditions, which allow HKND to operate the canal for 100 years, have also drawn criticism and from some in the political and business community.
Congress passed a law in 2013 giving Wang hiring and land expropriating powers and exempted his company from local tax and commercial regulations.
Wang, 42, heads more than 20 companies, including Xinwei Telecom Enterprise Group, which controls Chinese state telecoms firm Datang Telecom Technology & Industry Group.
He entered Nicaragua in 2012 with a contract to build a cell phone network, estimated to be worth $2 billion.
He set up HKND that November and won the license to build the canal in June 2013 with no competition.