The canal will split the country in two, with only one bridge uniting northern and southern Nicaragua.
By Ed Adamczyk 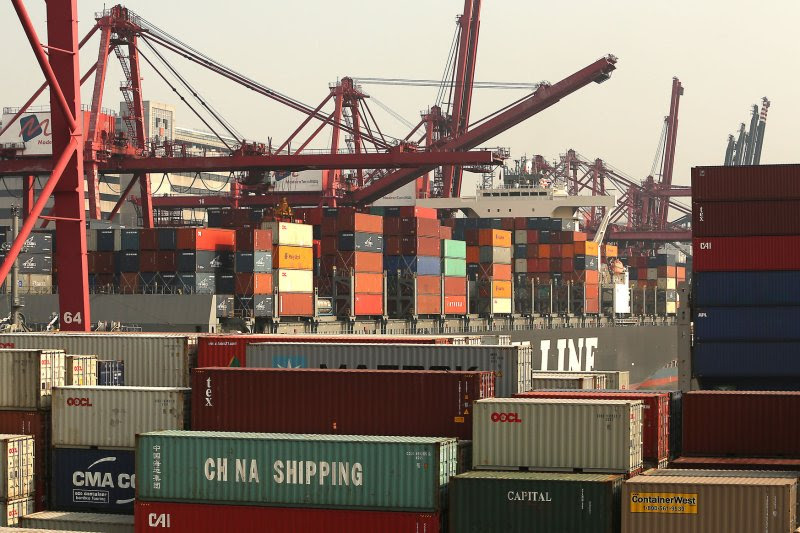 Hong Kong's deepwater seaport operates as one of the world's busiest container ports on October 12, 2014. The Hong Kong Nicaragua Development Investment Company won a no-bid contract to build a new canal in Nicaragua that would cut shipping time for freighters going between the Atlantic and Pacific Oceans. UPI/Stephen Shaver
| License Photo
MANAGUA, Nicaragua, Dec. 12 (UPI) -- Thousands of protesters marched through Managua, Nicaragua, earlier this week to protest the construction of a massive canal project scheduled to begin in days.At issue, for the demonstrators, is their belief their land will be confiscated, without reparations, for the Nicaragua Canal, or Nicaragua Intreroceanic Gran Canal, or Nicaragua Grand Canal.
The $40 billion to $50 billion project will begin Dec. 23, with a planned completion date within five years.
In the style of the now 100-year-old Panama Canal, the idea is to link the Atlantic and Pacific Oceans by constructing a canal 173 miles long, between 754 and 1,706 feet wide, 90 feet deep and using fresh-water Lake Nicaragua as its middle section, making it deeper, broader and more amenable to the world's wide and long cargo and oil ships than the Panama Canal. It will split the country in two, with only one bridge uniting northern and southern Nicaragua.
Proponents argue it is necessary for the country's economy, ranked by a U.S. government report as the second-poorest in the Western Hemisphere, behind that of Haiti. Francisco Telemaco Talavera of Nicaragua's prestigious National Agrarian University, predicts the project will create 50,000 construction jobs and 200,000 permanent jobs after the canal is functional. He is also head of the Gran Canal Commission, and has noted the project is difficult but feasible.
Although the first ceremonial shovels will be in the ground within two weeks, no environmental studies have been made public since Chinese entrepreneur and billionaire Wang Jing, 41, whose Hong Kong Nicaragua Development Investment Company won a no-bid, 50-year renewable contract to secure the rights for the effort.
Ideas about building a canal through Nicaragua have existed since the area was called the Kingdom of New Spain. Napoleon III of France wrote an essay on it in the early 19th century, and the United States considered the project from 1826 until the early 20th century, when it decided the local volcanoes made a canal through Panama more practicable.
Problems abound, starting with the citizens of Nicaragua, who say they have not been consulted by the government. Many worry they will lose their homes and farms, without recompense, and there are worries that dredging operations to deepen Lake Nicaragua, as well as oil spills and pollution, will spoil the country's only source of fresh water.
"We are prepared to do anything and everything to defend our land and protect our lake," Dona Albalina Espinoza, one of 7,000 residents on land that will be under water and concrete, told Fusion. "They want to run us off our properties, to scatter us like birds without a nest. My family has lived here for more than 100 years, and we would rather die here fighting than get forced off our land."
"This whole thing has been rushed," research biologist Jorge Huete told National Public Radio. "There was not consultations, there was no debate. ... there should be someone defending Nicaragua."
There is also a matter of money. Wang, whose fortune comes from the Chinese telecommunications industry but has no experience in mega-projects, has said he can raise the required $50 billion, but there are fears it will come from Chinese state-owned industries. Although China is already the largest trading partner of Brazil, Chile and Peru, an investment of this scale could be compared, the Brookings Institution's Richard Feinbergtold NPR, as "the Chinese planting their flag right in the heart of the Western Hemisphere."
The finalized route, unveiled only last month, calls for westbound ships to leave the Caribbean Sea, and hence the Atlantic Ocean, at the city of Bluefields, then travel up the widened and reinforced Escondido River to Lake Nicaragua. After crossing the lake, they would travel a man-made canal to the port of Brito, on the Pacific shore. A New York-to-San Francisco trip through Nicaragua's canal would be 500 miles shorter than one through the Panama Canal.
Plans include duty-free zones, a resort, an airport, improvements to the two ocean ports and a single bridge. Six municipalities will be split in half with no means of transit between sides, once the canal is built.
"With this canal, the country will be divided in two: The Nicaragua of the North and that of the South, like the two Germanies and the two Koreas," wrote Nicaraguan poet Ernesto Cardenal.
Chinese surveyors have been run off by rock-throwing residents of the affected areas, and there is anxiety over a plan that seems to be known only to Chinese investors and the Nicaraguan government. Assuming the canal is built by 2020 – Nicaragua has tried and failed at organizing canal projects of this scale in the past – it may be generations before investors, whoever they are, see a profit.
"It's going to take a lot of traffic and a very, very long time," Jean-Paul Rodrigue, Hofstra University trade expert, told NPR. "That's why I say the project is technically feasible but commercially very, very dubious."