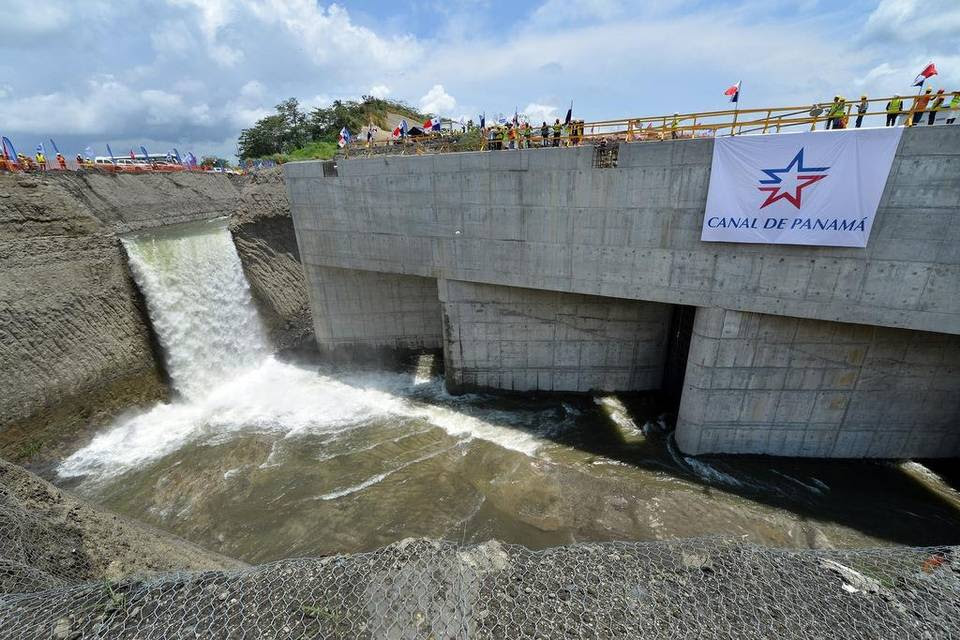 Water rush into the lower chamber of new 11-story locks on the Atlantic side of the Panama Canal expansion. | Panama Canal Authority
By Mimi Whitefield
mwhitefield@MiamiHerald.com

Some 50,000 cubic meters of water per hour began to pour into the Panama Canal’s new Atlantic locks earlier this month, a sign that the massive project to expand the waterway is reaching its final stages.
It took five days to fill the Atlantic locks, and then the Panama Canal Authority began pumping water into the chambers of the 11-story locks on the Pacific side of the canal in preparation for about four months of tests and inspections. It’s even chartering a ship so canal pilots will be able to get some real-life training on the new locks.
“Filling the locks with water is the culmination of arduous years of labor and the realization that we are within arm’s reach of completion of one of the most impressive infrastructure projects of our time,” said Jorge L. Quijano, chief executive and administrator of the canal authority.
The $5.25 billion expansion is now about 90 percent complete and is expected to open to commercial traffic in April 2016 — nearly two years behind schedule.
The expansion includes larger locks on both the Atlantic and Pacific sides of the 50-mile-long canal and new access channels that will be able to handle the longer, heavier and wider post-Panamax ships that increasingly transit the world’s oceans.
The new locks will work in parallel with the canal’s current 100-year-old locks, which will continue to handle the transits of smaller ships.
But Rodolfo Sabonge, who worked for the canal authority for 30 years before retiring as executive vice president of planning and business development in 2013, said the main impetus for expansion was that the canal was reaching capacity, rather than just the need to handle big ships.
A study showed the canal would reach its capacity in 2011, but the global financial crisis and falling levels of trade “bought some time really,” said Sabonge, who was in Miami last Friday to speak at a Trade Connections event sponsored by WorldCity.
“Now the expansion has come just in time,” he said. “The canal wasn’t going to be able to handle the number of ships.” Around 14,000 ships traverse the canal yearly.
One evidence of capacity problems is the long queue of ships that sometimes stacks up at the Atlantic and Pacific entrances to the locks, waiting to make their transits. The longest queue in history, Sabonge said, was a 100-ship lineup in 1995.
Panamanians aren’t the only ones closely watching the progress of the expansion. Ports all along the Eastern Seaboard, including PortMiami and Port Everglades, are rushing to be big-ship ready so they can become major ports of call for post-Panamax ships.
PortMiami is ahead in the race: It expects to have its shipping channels dredged by August so it will have the deep water necessary to handle fully laden post-Panamax ships. A sign at the entrance to the port bridge already reads “Welcome Big Ships.”
Port Everglades also wants to deepen and widen its shipping channels to accommodate fully loaded post-Panamax ships. Earlier this year, the Army Corps of Engineers Civic Works Review Board approved final environmental and economic feasibility studies for the project and last week the port got a favorable report that will allow pre-construction planning and design to begin. Authorization from Congress is pending.
Other ports in the Caribbean and along the Eastern Seaboard also want to attract big ships and become important trans-shipment centers.
“At the end of the day not everyone should do this,” said Sabonge, now president of Universidad del Caribe and a logistics consultant. “As long as you’re all competing with each other, it’s not going to benefit anyone.”
Sabonge pointed out that the canal itself “doesn’t create trade or demand. Expansion of the canal doesn’t necessarily mean more trade” will follow.
Cuba recently overhauled, deepened and expanded the Port of Mariel, apparently with an eye toward some day becoming a trans-shipment center, and cargo operations are being transferred from Havana to Mariel. But Sabonge said Jamaica’s Kingston port is better positioned for Caribbean trans-shipment . “Mariel is out of the way,” he said.
But if commercial ties between the United States and Cuba really do open up and there is no longer an embargo, Cuba could be an important location for near-shoring, he said, with manufacturers availing themselves of a low-cost, well-educated labor force and setting up plants on the island to feed U.S. demand.
“If that happens, you will have the best near-sourcing possible,” said Sabonge. “That gives Florida a great opportunity to become a base of all that.”
Follow Mimi Whitefield on Twitter: @heraldmimi

Will China finally fulfill Nicaragua’s dream of an inter-ocean canal?

Read more here: http://www.miamiherald.com/news/nation-world/world/americas/article25717330.html#storylink=cpy
Posted by crucestrail at 4:11 AM No comments:

21 hours ago
MANAGUA, Nicaragua (AP) — An environmental study has concluded a planned $50 billion canal across this Central American nation is "viable," officials said Monday, but without releasing details of the report.
Canal Commission spokesman Telemaco Talavera said the next step is to submit the findings to an analysis conducted jointly with the Environment Ministry. He said the proposed 172-mile (278-kilometer) route for the canal has been determined to be the right one.
Environmental activists, Nicaraguans who stand to be displaced and President Daniel Ortega's political opponents have criticized the project, including what they say has been a lack of transparency since it was first announced.
Crews broke ground on access roads related to the canal in December, but have yet to start digging the waterway itself. Some experts doubt it will ultimately be built due to financial, environmental and social concerns.
Xu Changbao of HKND, the Chinese company with the commission to build the canal, said the impact study demonstrates a serious commitment to the project.
"We will work together with the Nicaraguan people to realize this 100-year-old dream," Xu said.
Grand Canal Authority president Manuel Coronel Kautz said the report prepared by British-based consultant Environmental Resources Management was delivered Sunday.
An executive at the consulting firm, Manuel Roman, said the study was the result of two years of field research
Posted by crucestrail at 5:07 PM No comments: