Panama Canal Authority Administrator Jorge Quijano said he doesn’t expect a planned rival waterway in Nicaragua to be completed because it won’t be able to compete economically with his shipping channel.
“There’s very little hope for actually getting such a canal built because of the competitiveness of the Panama Canal,” Quijano said Thursday in Singapore, where he was attending a conference.
For investors in the Nicaragua project to get a return that they will accept, that waterway would need to charge tolls twice as high as those for the Panama canal, Quijano said. “So it will not be competitive,” he said.
Nicaragua in June 2013 granted Chinese telecommunications billionaire Wang Jing’s HK Nicaragua Canal Development Investment Co. rights to build an inter-oceanic canal that the Central American nation projects will cost $50 billion and take six years to complete.
The new waterway would be more likely to take 14 years to build and cost as much as $70 billion, Quijano said.
The official construction estimate “is very, very compressed,” he said.
Wang’s Hong Kong-based HKND Group has a 50-year concession to build the new canal. The estimated cost is more than four times Nicaragua’s 2013 gross domestic product.
A $5.3 billion enlargement of the Panama Canal is likely to be completed by the first quarter of 2016. Quijano said in August last year that officials are studying whether to dig a fourth set of locks to handle the growing fleet of super-sized ships as the current expansion, which was approved by voters in a 2006 referendum, may not be enough.

Wang is chairman of more than 20 enterprises in 35 countries, including Beijing Xinwei Telecom Technology Inc., according to HKND’s website. HKND describes itself as an international infrastructure developer that will design, build, and operate the canal, its first project.
HKND didn’t immediately respond to an e-mail seeking a reaction to Quijano’s comments.
Work on access roads for the construction of the Nicaraguan waterway started in December 2014.
Posted by crucestrail at 11:11 AM No comments: 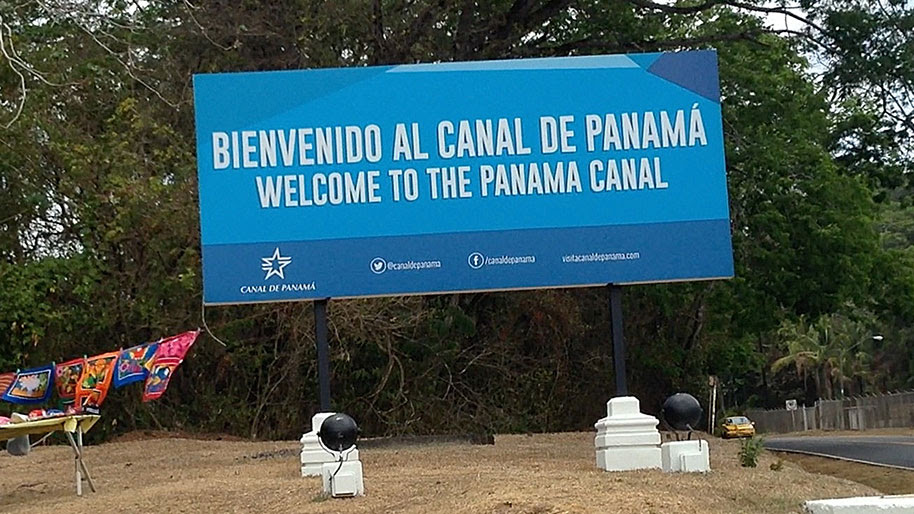 Panama Canal gets a $5.25 billion expansion that will allow the bigger cargo ships of the world carrying up to 14,000 containers to pass through the famous water-way. USA TODAY 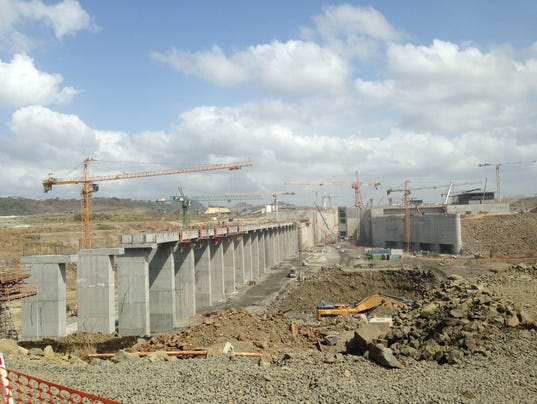 (Photo: Rick Jervis)
2173CONNECT 166TWEET 147LINKEDIN 9COMMENTEMAILMORE
PANAMA CITY — Giant backhoes claw into the ground, as helmeted workers position rebar atop of concrete pillars 100 feet tall. Cranes, trucks and teams of workers toil through a construction site here large enough to fit three Empire State Buildings, laying end to end.
More than 2,000 miles north, workers at the Port of New York and New Jersey are busy with their own colossal project: raising a bridge 64 feet, dredging the muck and mud of a harbor to deepen its waters and laying down new railroad lines.
The two projects are unrelated but tightly intertwined: One aims to release massive 1,200-foot-long container ships, the other to receive them.
The much-anticipated $5.25 billion expansion of the Panama Canal — the historic 48-mile waterway that snakes a watery path between the Pacific and Atlantic oceans in this Central American country — has been marred by delays and overspending. But its scheduled opening in April 2016 will allow some of the biggest ships in the world, able to carry up to 14,000 containers, to cut a quicker path to U.S. ports, particularly those on the Eastern Seaboard. Luis Ferreira, a spokesman with the Panama Canal Authority, surveys the canal's $5.25 billion expansion project. (Photo: Rick Jervis, USA TODAY)
Its expansion has similar scope and ambition. The mammoth new locks sit alongside the existing Panama Canal and will allow ships carrying up to 14,000 containers to pass. To build the original canal, workers excavated 7 billion feet of material and poured 113 million cubic feet of concrete, said Luis Ferreira, an engineer and spokesman with the Panama Canal Authority.
For the expansion project, workers have excavated 5.5 billion feet of material and poured 155 million cubic feet of concrete, he said.
"It's like building a new canal," Ferreira said during a recent visit to the construction site.
Engineers are now studying the feasibility of building a new set of locks that will allow even larger ships – those able to carry up to 20,000 containers – through the canal, he said. Those studies come on the heels of recent reports that a Chinese businessmen is pledging to build a rival $50 billion canal through nearby Nicaragua.
The trend of larger ships and pathways is not lost on Noel Hacegaba, chief commercial officer at the Port of Long Beach in California. Theoretically, the Panama Canal expansion poses a direct threat on his bustling port, if big ships choose to cut through the canal and head directly to eastern U.S. ports.
But Hacegaba and his port partners are betting they can still draw the big ships directly from the lucrative Asian routes, despite a recently resolved West Coast dockworkers strike that shooed away a lot of business. Port officials there are building a 304-acre "mega-terminal" and 205-foot-tall bridge to accommodate bigger ships, he said. The $4.5 billion package of projects should be completed by 2019.
"The pace at which these ships are growing is forcing all the ports to modernize and expand," Hacegaba said. "For us, it's been a real game changer."