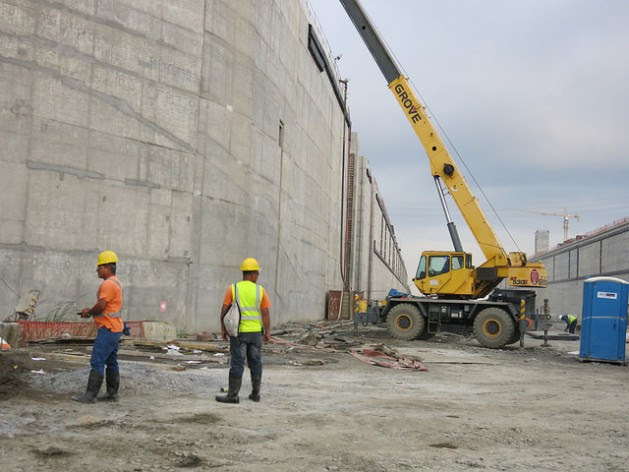 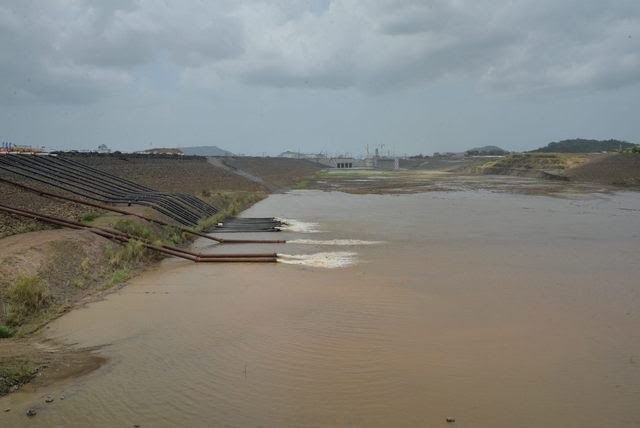 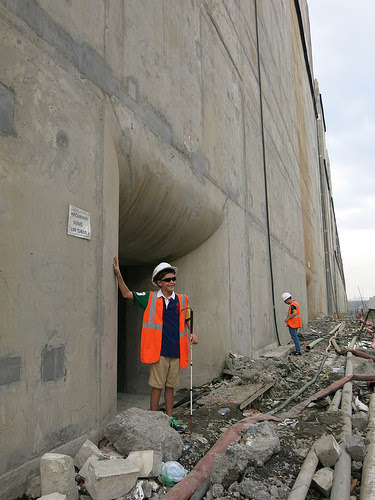 The dream of Nicholas Suchecki Guillén, an 11-year-old blind boy, to visit the Panama Canal expansion works and touch the new locks came true in Cocolí on the Pacific side, during the last tour before the flooding began on Jun. 25. Credit: Iralís Fragiel/IPS
The Panama Canal Pilots' Association (UPCP) has been holding demonstrations since 2014 to protest the ACP's management of the construction project. The latest was on Jun. 3, when the association complained in a communiqué that the process "has suffered setback after setback…with cost overrruns, improvisation and delays."
The biggest setback during the construction occurred in February 2014, when the contractor, Grupo Unidos por el Canal (GUPC), brought work to a halt for 15 days to protest the ACP's refusal to bear cost overruns.
According to ACP figures, the cost overruns reported by the GUPC, which is led by the Spanish construction company Sacyr Vallehermoso, total 2.3 billion dollars. A special commission was set up to resolve the matter.
The first of the demands taken care of was a 463 million dollar cost overrun which was due to the lower than expected quality of the basalt supplied by a local mine. The ACP reported that it only recognised 233 million dollars of that amount.
A dream shared with Nicaragua
Another shadow that hangs over the expansion project is the plan for the construction of an interoceanic canal in Nicaragua, which will change the game for Panama.
Nicaragua and Panama have a shared history with respect to the canal. In his book "The Path Between the Seas: The Creation of the Panama Canal, 1870-1914", David McCullough says the first study for construction of a canal, in 1811, designated Nicaragua as the route posing the fewest difficulties.
Initially, he said, the proposal was for the entrance of the canal to be at the mouth of the San Juan River because, although the overland crossing at Panama was shorter, Nicaragua was closer to the United States.
But technical studies found that Panama was the ideal spot for a canal. The French dug a channel, but the project failed. In 1903, U.S. President Theodore Roosevelt decided to build the Panama Canal, and with that aim backed Panama's separation from Colombia.
Construction was completed in 1914 and the canal remained under U.S. control until the end of 1999, as established by the Torrijos-Carter treaties in 1977.
"My opinion is that people in Nicaragua believe their country's development was stunted when the United States chose the Chagres River in Panama, to build the canal. It's the shadow of an unrealised dream," anthropologist Stanley Heckadon told IPS.
But since 1811 things have changed. And the San Juan route was ruled out, possibly due to the political implications, as it is a river shared by Nicaragua and Costa Rica.
In March, the anthropologist and 15 other experts took part in a two-day workshop at Florida International University in Miami, which assessed the environmental impact of the projected canal in Nicaragua and issued a warning about irreparable damage to the country's biodiversity and bodies of water.
Participants in the workshop, he said, believed the wrong route was selected – the one that uses the Punta Gorda River, which is much longer than the San Juan River. The projected investment is 50 billion dollars – 10 times the cost of the expansion of the Panama Canal.
Nicaragua's canal would be significantly longer than Panama's. "Panama's is 80 km long. The one Nicaragua hopes to have will be 280 km. In Panama it takes a boat 10 to 12 hours to travel between the Pacific and Atlantic Oceans, and in Nicaragua it will take two to three days," said the ACP's Ferreira.
But both Ferreira and Gandásegui said they saw the construction of a canal in Nicaragua as positive, because "the market is big enough for everyone."
Edited by Estrella Gutiérrez/Translated by Stephanie Wildes
© Inter Press Service (2015) — All Rights ReservedOriginal source: Inter Press Service
Panama and Nicaragua - Two Canals, One Shared Dream, Inter Press Service, Wednesday, July 01, 2015 (posted by Global Issues)
Posted by crucestrail at 3:16 PM No comments: