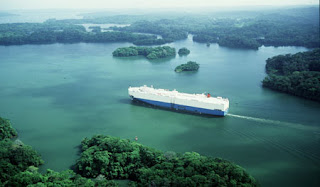 The Panama Canal Expansion Plan: Hazardous to Panama, Shipping and the Environment

Delays can be very costly for large ships that use the Panama Canal. It has been suggested that, with the single-lane lock arrangement selected, the service to be offered by the expanded Panama Canal will be the most reliable and prompt.

So, how much does that system reduce transit time relative to other systems, how does it improve reliability, and what are its down-sides?

The planned single-lane locks -- with three steps at each end of the canal, and with three water-saving tanks per step -- are to transit 12 ships a day, a limit seemingly set by water availability. (Two more could perhaps transit, if more water became available.)

The logical way to operate that system is to have ships enter each end of the canal, in succession, the first part of the day; and, likewise, exit the other end of the canal during the latter part of the day. The transit direction of the single-lane locks would be reversed after the last entering ship sailed clear of them. Then the exiting process would begin for the ships waiting at lake-level, which by that time would have crossed the Isthmus of Panama. The last exiting ship sailing clear of the locks would mark the end of one day and the beginning of the next.

This is similar to what is done in the present-day canal, although not for the same reason.

Today's canal has a narrow section called "the cut", through which the largest ships that currently transit the canal -- Panamax ships -- can sail in one direction at a time and only during daylight hours. To optimize ship-flow through it, both lanes of the locks at each end of the canal begin the day by raising ships. As the Pacific locks are nearest the cut, northbound ships are the day's first to negotiate it. When southbound ships begin arriving at the cut, cut traffic management procedures are initiated, and that is followed by the reversal of one lane of the locks.

As dusk approaches, the last of the large southbound ships hurry to get through the cut before dark. At about the same time the second lane at the locks is reversed to maximize the rate at which the ships exit the canal. During the remainder of the night, two-way lock operations are resumed to handle the smaller ship traffic that can ply the cut at night.

Since the width of the cut will not be increased sufficiently in this canal expansion effort to permit Panamax ships -- or the larger post-Panamax ships that are to transit the new locks -- to meet each other in the cut, these larger ships will still have to take turns sailing through it.

Because ships will need to wait for the transit direction of the cut, as well as that of the planned single-lane lock, to match theirs, a transit (from entry of the locks at one end of the canal to exit at the other) will most likely take about 15 hours, assuming all else goes smoothly. In theory, it could take a ship about two-thirds of that time, but operational reality is different.

A simpler, proven two-lane alternative lock arrangement could be built for about the same cost. With only two-steps, it would handle up to 22 ships a day, compared to the single-lane system's maximum of about 14. A transit by way of these locks would take about 17.5 hours.

When comparing these lock options, there is more to consider than just the differences in transit time and capacity of each system.

Because of this, it would be logical to reduce the use of the original locks and use that water more effectively in the new locks to operate them at full capacity.

The two-lane alternative locks need about 19 transit-volumes of original lock water to transit 22 ships. As there are presumably 12 transit volumes already available (per the single-lane lock plan), only 7 more need to be "borrowed" from the original locks.

Because idle time is gained when transits through the original locks are reduced, that time can be applied towards reducing the amount of water used by those transits that do occur. As a result, total transits through these locks only need to be reduced by about 4 to gain the needed water.

With this alternative of comparable cost, the canal capacity gained would be about 1.6 times that gained by using the planned system.

This means that for every three ships that transit the two-lane alternative locks only two ships could transit the single-lane system. This suggest that, to recover the income from the ship that does not transit, the ships that do transit would be charged about 50% more in tolls.

For the third ship that does not get to transit, is its "loss of time" not relevant?

Then there is the matter of system reliability and safety.

Because the planned system only has one lane, all large ship traffic would halt were it to close unexpectedly. How are costs to shipping impacted when that happens?

With the two-lane alternative, on the other hand, ships could continue to transit through the unimpaired lane.

The single-lane system requires a dam to be built across known fault lines.

What is the cost of losing Gatun Lake should one of those faults slip and cause the dam to fail? And, how can reducing 12 daily transit times by 2.5 hours be reconciled against lost lives and a multi-year canal shut-down should that dam fail?

The two-lane lock arrangement avoids the need for such a dam.

Environmental and ecological issues must also not be overlooked.

The planned single-lane arrangement promises to increase lake salinity at a rate that is markedly higher than that of today's canal. Many reputable studies have shown this.

Not only will what is planned pollute a world-important freshwater lake with salt, that pollution will put many sea creatures along the coast of both oceans in harms way.

How can reducing the canal transit time of a few select ships by 2.5 hours justify placing seafood delicacies enjoyed by millions on the endangered list?

That is unacceptable and need not happen.

That plan will cost far more than the current one. It will terminate the way of life of a great many people and devastate the ecology of vast areas in order to obtain the water it needs to increase the post-Panamax ship transit capacity to about 30.

By contrast, at lower cost and within the confines of today's watershed, the canal's post-Panamax transit capacity could be increased to 40 by adding a second two-lane lock arrangement like the first and by enhancing both to save even more water. The enhancement would consist of adding two water-saving tanks at each step of each two-lane arrangement, costing only about 15% more.

Water to operate both enhanced two-lane lock arrangements would be borrowed from the original locks by further optimizing their use of water and time as was described earlier. The option to expand the canal's watershed by expropriating lands and flooding vast areas would be reserved for when climate changes force it at some future date.

Using the alternative locks in both expansions would result in about 27% more added capacity at a far lower cost, with far less impact to the ecology and to third parties, and a greatly reduced risk of total loss, compared to what is planned.

Today, the Panama Canal serves around 36 ships a day. Despite certain canal features being seen as causing "unnecessary" delays -- per a lack of understanding of the purpose of those features -- ships continue to show up and wait their turn to transit.

Most of its users find transiting the Panama Canal a much better deal than any other option; and, more would use it if they could.

Given that preference, and because once the planned single-lane system is built there is no way to later convert it into one that is more efficient and less polluting -- nor can the risk of losing the lake be removed, nor can any loss of ocean species be undone -- replacing that design is imperative.

A two-lane lock arrangement offers a truly sustainable expansion: providing more service for the same cost, allowing for greater future growth, and avoiding catastrophic problems. That is what needs to be added to the Panama Canal.

Me mantengo a su disposición,