By LUIS GALEANO8 hours ago


MANAGUA, Nicaragua (AP) — Nicaraguan officials and a Chinese company broke ground Monday on a $50 billion transoceanic waterway predicted to rival the Panama Canal, but which has been a source of anger and protests from citizens in recent weeks.
President Daniel Ortega, with Wang Jing, president of the contracting firm HKND Group, said the canal will change the economy of Nicaragua, one of Latin America's poorest countries, as well as the rest of the hemisphere.
In a televised address, he promised the project would have minimal impact on the environment and that farmers concerned about their land will receive a just price.
"To be close to roads and development around the canal will be better than what is there now," Ortega said. "The farmers know very well, and the producers, that they live begging us for roads, and that these projects will give greater riches to them and their families."
The groundbreaking marked the start of some ancillary projects in Brito, a city about 5 kilometers (3 miles) from Nicaragua's Pacific coast where the first port will be built. Officials say the canal will be fully operational by 2019.
Projected to span 173 miles (278 kilometers) between the Caribbean and the Pacific, the canal would be the realization of a dream that has been studied and discarded multiple times since the early 1800s. 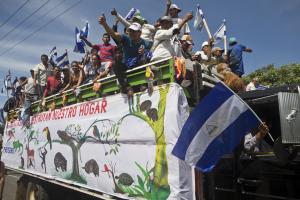 In this Dec. 10, 2014 file photo, farmers shout slogans against the construction of the planned inte …
Last year, Ortega's allies in Congress fast-tracked legislation granting Honk Kong-based HKND a 50-year concession, renewable for another 50, to build and operate a canal in return for a payment of $10 million a year once it's up and running. The law lets HKND develop ancillary projects — ports, an airport, roads, a railway — even if the canal doesn't get built.
Thousands of Nicaraguans have protested in the lead-up, fearing their land will be taken without fair compensation.
"We're not going to allow them to kick us out of our property. We're ready to die before we give our property to the Chinese," said Orlando Ocampo, who leads the farmers in Tule, a municipality about 250 kilometers (150 miles) southeast of Managua on the Caribbean side of the canal route.
Environmentalists accuse the government of ramrodding the studies and ignoring the threat that they say cargo traffic will pose to Lake Nicaragua, the country's main source of fresh water.
HKND hired the respected U.K.-based consulting firm Environmental Resources Management about a year ago to assess the environmental and social impact of a project that is expected to displace 29,000 people. In late July, just two weeks after HKND announced its preferred route for the canal, ERM held community meetings in seven cities over 10 days, according to a document on HKND's website. 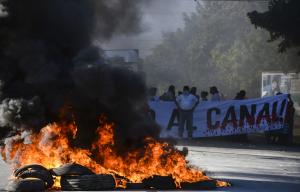 Residents burn tires at a blockade on the Pan-American highway during the groundbreaking day of the  …
Some who attended the sessions left feeling they were merely being told what was going to happen rather than asked for input. Those who asked how much they would be paid for their lands were told only that officials would go door-to-door to inform them.
In a statement sent to The Associated Press on Monday, ERM declined to discuss the content of the studies, saying the work is ongoing and it would be premature to do so. HKND said in November they were complete.
ERM added that a wide range of experts from ecologists and economists to social scientists and climate change experts were involved, thousands of people and households were surveyed and more consultations will be held with indigenous people and communities that stand to be affected.
"Like any independently prepared ESIA (environmental and social impact assessment), our deliverables will not include a recommendation for whether the canal project should or should not proceed," ERM said. "That is not the purpose of an ESIA."
The Cocibolca Group, a collection of Nicaraguan environmental interests, issued a statement Monday calling it irresponsible to start construction before the completed environmental and social impact reports are in hand.
"This is contrary to the most basic environmental practices and national and international standards, and threatens the living conditions of the indigenous and communities of African descent, as well as the entire population of the country," the statement said.
Posted by crucestrail at 4:34 AM