An independent safety study into the Panama Canal expansion, which was commissioned by the ITF (International Transport Workers’ Federation) and released this morning at a press conference in Panama City, has raised pressing concerns about the canal’s new locks.
The ITF commissioned the study, which was carried out by Brazil’s Fundação Homem de Mar (FHM), in response to safety concerns raised by its Panamanian member unions (see http://goo.gl/TdcK5Y). FHM was tasked with preparing a mathematical model, using a Manoeuvring Simulator Class A, to recreate the new locks, a neo-Panamax vessel and thetugboats that would assist its manoeuvres. 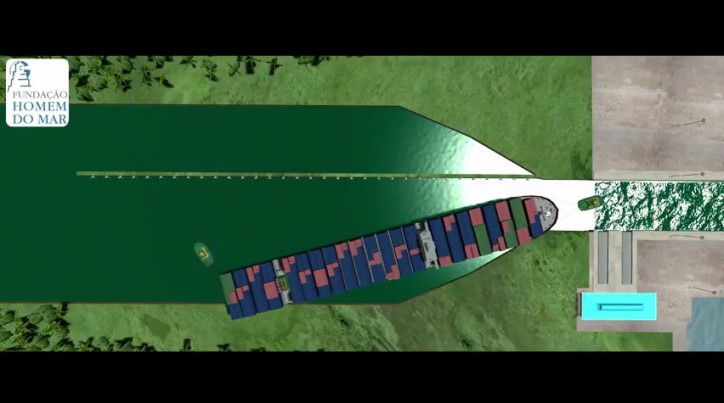 The concerns raised by the unions centred on the Panama Canal Administration’s refusal to engage in dialogue on matters such as training, as well as the technical and construction issues that have led to delays in the operation of the new infrastructure. They have been borne out by the study’s simulation exercises. These, using a neo-Panamax model vessel and two tugboats, concluded that the safety of manoeuvrability is compromised due to several factors:
The full study can be seen at a http://goo.gl/17QF2K. A video of a simulated transit can be seen below:


The study’s conclusions were released this morning at a press conference in Panama City attended by leading representatives of trade unions, safety and maritime organisations, as well as government representatives.
The ITF, like its Panamanian member unions, has previously offered to work with the Panama Canal Authority (PCA) to ensure that the safety concerns of those who will work on the new infrastructure are addressed, and is making the study available to the PCA.

Speaking from Panama City, ITF general secretary Steve Cotton said: “I wish I could report that the study gave the new locks the all clear. Sadly, I can’t. Instead we face a situation where those working on the canal, and those passing through it, are potentially at risk. That will have to change.”
“The study was based on the PCA’s original plan to use one forward tug and one aft tug. We understand that compensatory alternatives are being examined, which we welcome.”
He continued: “The issues identified in this study will not be a surprise to workers on the canal. Unfortunately their expertise and experience have up to now been snubbed. Thankfully they’re still on offer. Those who’ll be working these locks have to be brought into the process, while there’s still time to fix the defects.
“We share our affiliated unions’ concerns and we can assure that The ITF and its canal affiliates want the new canal to be safe and to work. The Panama Canal is crucial for the international maritime industry. We offer our full support to make this important maritime route safe for all those who transit it or work on it, and for a positive engagement between unions and the PCA.”
He concluded: “We believe that this is an issue where there is common ground with shipowners, insurers and others in the maritime industry, so we will seek to engage them in the discussions and strategies for improvement in this crucial area and may also consider updating the simulation to cover new manoeuvring alternatives in co-operation with the PCA, as well as other shipping industry representatives.”

Source: ITF
Posted by crucestrail at 10:07 AM