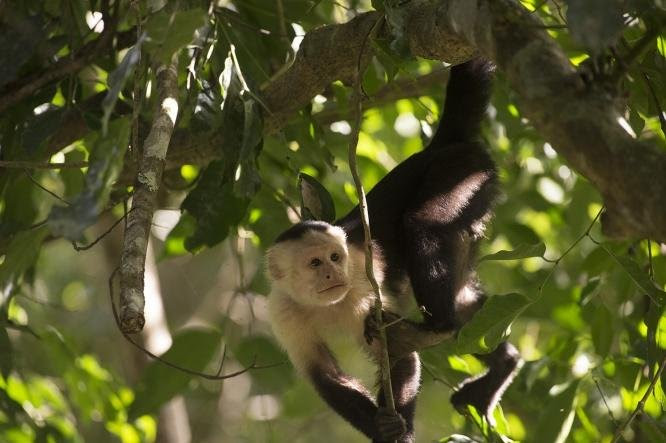 A white-faced capuchin, Cebus capucinus, hangs from a tree in Panama. Photo by Sean Mattson/Smithsonian Tropical Research Institute
PANAMA CITY, Panama, April 20 (UPI) -- For the first time, a monkey fossil dated prior to the formation of the Isthmus of Panama has been discovered in North America. The fossil was excavated after being exposed during the Panama Canal expansion project.
The Isthmus of Panama first rose from the sea, connecting North American and South America, some 3.5 million years go. The monkey teeth recovered during the project are at least 21 million years old.
As engineers bulldozed and dynamited the earth in preparation for the expansion of the Panama Canal, a team of researchers with the Smithsonian Tropical Research Institute, as well as the University of Florida and New Mexico Museum of Natural History and Science, scampered into exposed bedrock and recovered fossils and evidence of the region's rich geologic past.
"I asked my boss for a million dollars to dig a hole in the ground," STRI researcher Carlos Jaramillo said in a news release. "Then the Panamanian people voted for the Panama Canal Authority to spend $5.6 billion dollars to expand the Canal and unlocked a treasure trove for us, containing this new monkey species and many other fossils."
Scientists decided to name the newly discovered monkey speciesPanamacebus transitus, an homage to Panama's international traffic and the migrating monkey's seafaring ways.
Previously, researchers assumed New World monkeys evolved in isolation, cut off from North America by a wide expanse of sea. But the new findings --detailed in the journal Nature -- suggest some species were able to expand their range prior to the formation of the land bridge.
"We suggest that Panamacebus was related to the capuchin -- also known as 'organ-grinder' monkeys -- and squirrel monkeys that are found in Central and South America today," explained Jonathan Bloch, curator of vertebrate paleontology at the Florida Museum of Natural History.
There's been very little fossil evidence of animals moving from South American to North America. Some researchers suggest mammals from South America simply preferred the jungles to the south, while other say the lack of evidence may simply be the result of a limited fossil record in Central America.
The latest discovery suggests there are indeed fossils waiting to be uncovered -- a few which might further shift scientists' understanding of ancient migrations in the Americas.
Like Us on Facebook for more stories from UPI.com
Related UPI Stories