Who's behind the 'Nicaragua Grand Canal'—and why?

Silvana Ordoñez | @SilvanaCNBC
8 Hours AgoCNBC.com
194
SHARES
110
COMMENTSJoin the Discussion
Backers of the "Nicaragua Grand Canal" talk about a vibrant commercial waterway that will reshape commercial shipping, reap a windfall for investors and haul one of the hemisphere's poorest nations out of poverty.
But the project's detractors—and they are many—are having a hard time understanding what, exactly, those pro-canal people are talking about. And they also question whether it's being driven by commercial interests, or Chinese geopolitics.
About a year from the scheduled completion of a $5.2 billion Panama Canal extension that will let the existing waterway accommodate bigger ships, a Chinese consortium and the Managua government have said that they began work on a Nicaragua canal.
Read MoreChinese new year left at sea by West Coast ports fight
Hong Kong Nicaragua Canal Development Investment (HKND) claims that it will complete the megaproject in 2019. (A project "groundbreaking" cited by media reports in December was actually just the start of an access road to let through heavy equipment.)
The Nicaragua Grand Canal is projected to cost $50 billion, and HKND says it will be able to accommodate ships of up to 23,000 twenty-foot equivalent units (TEUs, a measure equal to 20 feet by 8 feet by 8 feet of cargo). That compares with the 13,000 TEUs that the Panama Canal will be able to accommodate after its expansion. 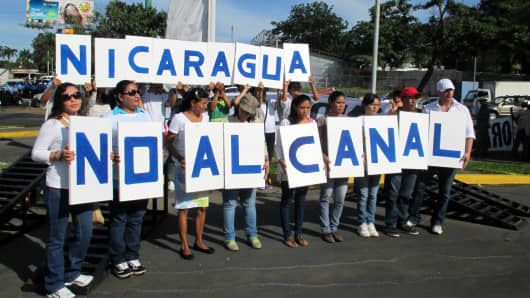 Sandra Cuffe | Anadolu Agenc | Getty Images
Thousands of demonstrators march against the 173-mile Interoceanic Grand Canal that they say will negatively impact the environment, communities and Nicaraguan sovereignty, in Managua, Nicaragua, December 10, 2014.
But the 173-mile Nicaragua canal project has generated criticism and skepticism, and lots of it. Industry experts question the level of demand for a second canal, its potential as a going business concern and the possible environmental impact in what is geologically unstable terrain. Many even doubt that the project will go much further than its paper proposal.
"The vision is very significant, but the reality is, a lot of people, including myself, are very skeptical that this will happen," said Eric Farnsworth, vice president at the Americas Society and Council of the Americas, a group that promotes democracy and free trade. "There have been over 70 attempts to build a canal in Nicaragua, but it hasn't happened."
Read MoreDoubts deepen over Chinese-backed Nicaragua canal
Farnsworth cited Nicaragua's geological instability, including active volcanos and earthquakes, as one reason the Nicaraguan canal was never built in the first place. In 1902, Panama beat out Nicaragua for the American-built canal route, when the U.S. Senate voted for the smaller, more southerly nation by a mere eight votes. The canal played an important role in the recent U.S. West Coast ports strike, which forced some vessels to use the Panama route to get their goods to the East Coast.
Meanwhile, Nicaraguan farmers opposing the canal construction have organized protests—some of which have become violent—because it would expropriate their lands. Activists have also voiced loud concerns over the canal's environmental impact, pointing out that it would require the dredging of Lake Nicaragua, the largest freshwater lake inCentral America and a critical water source.

"The shipping industry is bleeding. The current volume is not conducive for this type of investment."-Jean-Paul Rodrigue, Hofstra University

Like Farnsworth, a large number of experts who spoke to CNBC have more questions than answers about the project, but they all agree on one thing: There's not enough demand to justify a second canal so close to the Panama Canal.
"I sincerely believe we don't need another canal. I don't think there's enough ship traffic to warrant the construction of another canal," said Bruce Carlton, president and CEO of the National Industrial Transportation League, a shipping industry advocacy group.
Nicaragua refutes that argument. Telémaco Talavera, official spokesperson for the Nicaragua Grand Canal project, said that there will be demand from world shippers for their very largest vessels, which even the improved Panama Canal won't be able to accommodate.
Read MoreCrime on the high seas: The world's most pirated waters
"The Triple-E type of ships won't be able to go through the Panama Canal, but Nicaragua will permit the passage of these ships," Talavera told CNBC, in an interview which like several for this story is translated from Spanish. "There will be a need for world shippers to reduce time, costs and pollution, and that will be an opportunity for Nicaragua and the rest of the region."
The Triple-E that Talavera refers to is a 1,312-foot ship, the largest ship by length that is operated by Maersk, the world's largest container-shipping company by capacity. But even Maersk cast doubt on the need for a Nicaragua canal.
"It's not something we have a demand for, and we're not able, at this point, to tell whether we will use it," said Michael Storgaard, senior press officer at Maersk. "It may be so heavily priced that we may not use it. We don't know anything right now."
Moreover, most ports in the United States won't be able to accommodate the larger ships that the Nicaragua canal is hoping to target, said Jean-Paul Rodrigue, a transportation expert at Hofstra University. He added that it would require a hugely expensive investment for U.S. ports to gear up for those types of ships.
"The shipping industry is bleeding," Rodrigue said. "The current volume is not conducive for this type of investment." The shipping industry took a hit during the financial crisis when many economies' growth stalled and trade volume decline.
Hong Kong-based HKND, which won the canal project on a no-bid basis and was granted a 50-year, renewable concession to run it, is betting on an industry comeback: "China should be expected to again accelerate its own economic growth in the coming decades, while many other countries will re-establish more respectable growth rates than those experienced in recent years," the group says on its website.
But even a comeback in demand on a global basis doesn't warrant another canal in Central America, critics say. Any given waterway's future traffic volume is a bet that depends on economic trends on literally a global scale.
"General demand may grow at a moderate rate, but not necessarily in the canal route, and not necessarily in the product category that would make the route profitable in terms of tolls," said Rodolfo Sabonge, a former marketing and development executive of the Panama Canal Authority, who was in charge of analyzing demand projections for the expansion project.
Read MoreThe private equity strategy for oil
Sabonge pointed out, for example, that Brazil has seen huge economic growth in Latin America, but anything that ships to or from a point south of Recife, depends on the Cape of Good Hope as its route to or from the Pacific.
The Panama Canal expansion began in 2007, adding a third set of locks and doubling its waterway capacity. The current locks allow the passage of up to 5,000 TEUs, but after the expansion is completed, the canal will be able to handle the passage of ships with up to 13,000 TEUs.
"We didn't decide the size of the new locks arbitrarily. We decided them based on a study of demand, and we chose the lock size that made sense for the next 15 years," he said of the Panama's Canal's expansion.

The 'why' for Managua

Nicaragua's motivation for the canal is obvious. The Central American country is the second-poorest country in the Americas, after Haiti, with 42.5 percent of its population living in poverty (2009). The project would generate 50,000 jobs during its construction phase, and another 200,000 jobs once it is in operation. Panama, a prosperous economy, with an economic growth rate of 8.4 percent, is in many ways a reflection of what Nicaragua could have been.
Read MoreWhen West Coast docks will catch up: Port boss
"This will help the country to move forward socially and economically. It will be a development process that will help us get rid of our main enemy—poverty," said Francisco López, vice chancellor at the Universidad Central de Nicaragua.
The development plans include the building of roads, two ports—one in the Pacific and another one in the Caribbean—an airport, a free trade zone and a tourism complex with hotels. HKND has approval to build some of the other elements even if it doesn't build the canal itself.

Is Beijing behind it?

The motivation for HKND is less clear, and the company did not respond to CNBC's repeated requests for comment.
Given the project's expected costs of operation, the tolls in the much larger Nicaragua Grand Canal would have to be considerably higher than the tolls in the Panama Canal in order for investors to benefit from the project.
Read MorePort slowdown costing small businesses time and trust
The canal would need to generate an annual income of about $5 billion, explained Sabonge. But the Panama Canal, with a transit of 13,482 ships, carrying 327 million tons, generates annual revenue of only about $2 billion, according to 2014 figures.
Naturally, the lack of an apparent financial feasibility has raised questions about whether the Nicaragua Grand Canal is a commercial project for HKND—or a geopolitical project for the Chinese government.
"If an investor doesn't see that there's a viable option, or demand out there to make a profit, they wouldn't make an investment. That leaves the question of maybe it's coming from the government," said Chang Qian Guan, a professor at the U.S. Merchant Marine Academy.

"If there are geopolitical interests behind the building of the canal, and the investment returns do not matter, and nothing has to be repaid, then the Panama Canal would be severely affected."-Rodolfo Sabonge, formerly of Panama Canal Authority

HKND and the Nicaragua government have both denied that the Chinese government is involved. It's worth noting as well that Nicaragua and China don't have formal diplomatic relations. China, however, has expressed interest in the past in building a railway across South America as an alternative to the Panama Canal. Most Chinese imports to and from the region travel through Panama.
Controlling that passage would be a boost to China's commercial security, something that Beijing has already demonstrated—through its actions in the South China Sea, East China Sea, Africa and elsewhere—is a political priority of the first order.
If Beijing is the project's real sponsor, then its essentially limitless pockets would mean big problems for Panama.
"If there are geopolitical interests behind the building of the canal, and the investment returns do not matter, and nothing has to be repaid, then the Panama Canal would be severely affected. There is not enough demand for two canals," Sabonge said.
"But if the Nicaragua canal has to adhere to what any other business has to, from an investment standpoint, I think the canal wouldn't be much of an impact for the Panama Canal," he said. "Based on investment requirements, the prices of the Nicaragua canal would be very high, and the Panama Canal would be able to maintain its profits and lower prices."

Posted by crucestrail at 2:02 PM