What’s going on with the world’s canals 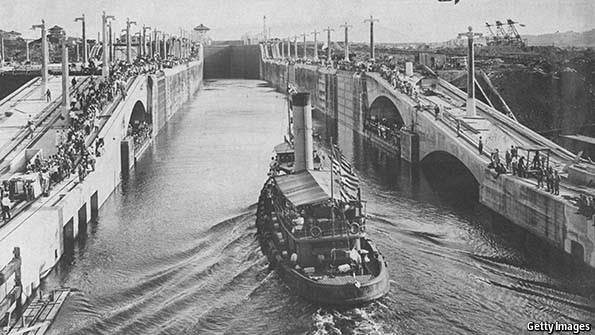 AS THE 100th anniversary of the opening of the Panama Canal on August 15th approaches, the world can look forward to three historic developments: a doubling of Panama’s capacity, hopefully by the end of next year, with completion of a third set of locks to handle giant container ships; work starting on a rival Atlantic-Pacific canal across Nicaragua; and a new Suez canal turning much of the original into a two-lane marine highway. The ambitious Egyptian plan came in a surprise announcement by the country’s president earlier this month, following confirmation of Nicaragua’s plan in July. These are just the latest developments to suggest that the expansion of the Panama Canal will not have anything like the impact on global shipping that its opening did a century ago.
When the Panama Canal Authority started planning an expansion ten years ago it aimed to win more traffic from the rival Suez Canal by being able to handle container ships carrying up to 13,000 boxes, compared with just under 5,000 today. But since then shipping lines have brought in vessels big enough to carry 18,000 containers, and they dream of even larger ones. Suez is a sea-level canal with no locks or pinch-points. Because it can take the bigger vessels, it has seen its share of traffic between Asia and the east coast of the United States rise from 30% four years ago to 42% by October last year. Another problem for Panama is that some manufacturing is moving out of China as wage costs there rise—and drifting to more southeasterly parts of Asia, closer to the Suez route.
Panama is also facing challenges closer to home. Technical problems with dodgy cement and machinery at the new locks are mostly responsible for a delay of at least 12 months on the $5.25 billion project. It also did not help when a quarrel about cost overruns caused work to stop for more than two weeks in February. Meanwhile, nearby Nicaragua, which was once discarded as a possible canal thoroughfare because of the perceived earthquake and volcanic risk, is trying to rekindle its 19th-century dream. Last month the government in Managua endorsed the route for a 278-km (173-mile) potentially sea-level (and therefore lock-free) canal connecting the Pacific to the Atlantic using the Brito River, Lake Nicaragua and rivers on the Atlantic side. Generally, rumours of a Nicaraguan canal three times longer than the Panamian one, backed by little-known Chinese investors, have been met with derision in shipping circles. But as a sign of broader Chinese interest in the isthmus, on August 8th businessmen from the state-owned China Harbour Engineering Company said they were exploring the idea of investing in a fourth set of locks on the Panama Canal.
Other developments point to sharper competition for the Panama Canal as it enters its second century. Shipping containers from Shanghai to New York takes 26 days via Panama, versus 28 days using Suez. Shipping to Californian ports and then using transcontinental trains is quickest with 21 days, but costs about $600 more per box transported. The firm with the biggest ships, A.P. Moeller-Maersk, has stopped sailing via Panama, and now uses Suez instead. So the Panama Canal Authority is hedging its bets. It is leaving open the door to further expansion, but also has thriving port complexes on each coast, and a railway linking them. Panama hopes these and the associated duty-free zones will ensure its future as global logistics hub, a sort of Singapore of the Americas. Singapore is still some way off, however.
Dig deeper:
A row at the Panama Canal will have ripple effects on global sea trade (February 2014)
How the Suez crisis marked the end of one era and the start of another, for Europe, America and the Middle East (July 2006)
Panama hats: they're not actually from Panama (July 2014)

crucestrail said...
This comment has been removed by the author.
12:34 AM