100 Years After Its Birth, The Panama Canal Is On The Verge Of Creating A Huge New Opportunity For US Exporters 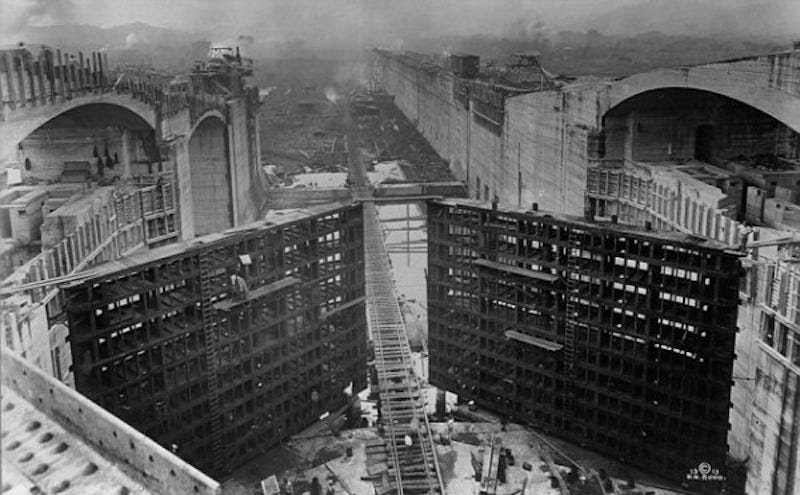 PanamasCanal.com
On Aug. 15, 1914, the Panama Canal saw its first cargo ships slice through two continents on their way to Asia, forever transforming global trade flows.
It was the product of almost 15 years of military, diplomatic, and economic maneuvers.
Now, 99 years later, the canal is set to cause a surge in U.S. exports across the commodities sector.
A $5.25 billion expansion is set to wind down in 2015. In its current form, the canal can handle vessels that can carry up to 5,000 TEUs, or 20-foot equivalents — basically, the size of a shipping container. Once the expansion is completed, the canal will be able to handle "Post-Panamax vessels," which can carry up to 13,000 TEUs.
For reference, according to the FT, carrying a 10,000-size load would require 18 trains, 5,800 trucks or 570 planes.
Any sector where the U.S. is a net exporter is likely to reap some benefit from the expansion. For instance, the U.S. currently enjoys a positive balance of trade in its paper, raw textile, and machinery industries.
But their gains are likely to be modest compared with those of two other major sectors: agriculture and natural gas.

U.S. agriculture stands to gain the most from the expansion, further entrenching America as the world's breadbasket (we're already No. 1 in wheat, corn and soybeans exports). In a 2011 report prepared for the U.S. soybean industry, Informa Economics forecast that volumes of grain and soybeans transiting the Panama Canal will jump 30% or 426 million bushels (or 11.2 million metric tons) to 1,840 million bushels (the equivalent of 48.4 million metric tons) by 2020/21 from the projected volumes for 2011/12.
It's already $6 per metric ton cheaper for farmers in the country's midsection to ship their goods down the Mississippi River through the Gulf than to ship them out through Seattle. Once the expansion is finished, vessels will be capable of handling an additional 7,000 metric tons on a Panamax or 13,300 metric tons on a small Capesize vessel. As a result, the area of farms who can take advantage of traveling down the Mississippi through to the Gulf instead of using freight trains to the West Coast will be able to expand, Informa says, while putting pressure on freight train companies to lower their rates, as shown in this map: 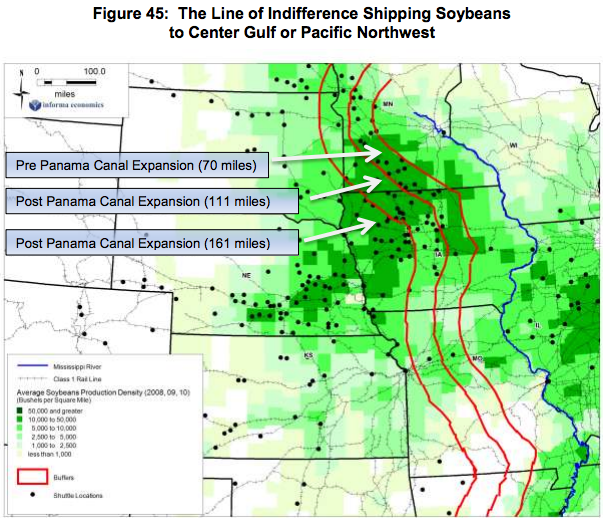 Informa Economics
"For bulk shipments, the expansion of the Panama Canal is extremely important," Informa says. "The possibility of lowering the Center Gulf freight rate by $14 per metric ton will expand the barge competitive draw area. The railroads shuttle train locations in the expanded barge draw area will either lower freight rates or lose modal share.
Of course, the canal is a two-way street, and Informa says any domestic U.S. industry that has to compete could face losses because their competitors will also be seeing transportation gains. Steel, cement, and fertilizer are likely to take the largest hits, Informa says.
But this also means consumers and end users will be seeing price gains and increased economic activity. Informa:
"The ability to unload larger ships on the East Coast makes it more likely a large retailer will build a major distribution center in the the Eastern US That will in turn enable ocean carriers to add a string of ports to call. The new availability of containers, load out times and increased destination ports expand backhaul [trucking] opportunities."
Ports up and down the East Coast have already invested millions of dollars to prepare for this outcome. Savannah, Georgia, for instance, has spent $662 million expanding its own port to accommodate post Panamax vessels, the benefits of which the Army Corps of Engineers said in 2012 would far outweigh costs.

Currently, Very Large Gas Carriers, the vessels used to transport American petroleum and natgas products, must sail all the way around South America to reach Asia. But once the expansion is complete, shipping days will be cut to 25 from 41. That means the time it takes to get from the East Coast to Asia will now be comparable to the time it takes to get there from the Middle East, resulting in freight cost savings of up to 50%, according to AllianceBernstein's Neil Beveridge.
Beveridge says the coal and petroleum product sectors are unlikely to change much given flagging demand former the former and narrow pricing spreads for the latter.
Not so with natural gas.
Thanks to the shale boom, which has made the U.S. the world's largest natural gas, natgas prices have plummeted, which has enticed importers, especially in Asia to start sending for U.S. goods. The current cost of transporting natural gas is already relatively high, which means it has more to gain from a canal expansion, Beveridge argues.
Bloomberg's Isaac Arnsdorf says exports to Japan, which has shut down its nuclear plant fleet in the wake of the Fukushima incident, could surge, and with the canal expansion, it will cost 30% less for carriers to reach a the country from Louisiana.
"There’s a huge market in Asia, a huge resource in the United States, and the Panama Canal is an enabler of this trade, reducing the cost of getting LNG to the market," Sverre Bjorn Svenning, an analyst at Fearnley group in Oslo who's studied the canal expansion told Arnsdorf. "We didn’t see this coming."
Most gas gets exported in the form of liquefied natural gas (LNG) and liquefied petroleum gas (LPG). Beveridge is slightly more bearish on efficiencies for LNG, since Washington may seek to limit LNG exports to maintain cost advantages now enjoyed by U.S. consumers.
Rather, he argues, LPG is likely to be the greatest beneficiary. LPG consists of hydrocarbons like propane and butane that exist as a gas at sea level but liquid at reduced  pressures and temperatures. It's mostly used for cooking and space heating, as well as an industrial feedstock.
Global LPG demand is about 30% larger than the global LNG market.  Asia-Pacific countries comprise 40% of global consumption and 7% of demand growth.
With the expansion, the cost of shipping LPG from the U.S. to Asia will equal the cost of shipping it from the Middle East, Beveridge says. "As such we expect demand for US LPG to increase sharply which will put downward pressure to Middle East LPG export prices," he writes.
We've come full circle.