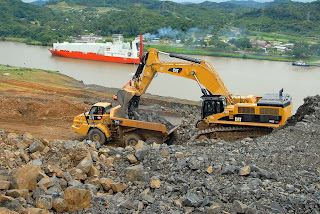 It is said that expanding the canal will benefit everyone. The Panama Canal’s cargo capacity is to be nearly doubled by the planned expansion, which is to add a single new lane for transiting Post-Panamax ships.

Increasing the canal’s capacity has been long desired and seen as good, so it is difficult to argue against its expansion. However, is the chosen single-lane system really the best and in the best interest of shippers and of society?

An independent review of water-saving and operational techniques identified better lock systems that have been around for more than 100 years, and more recent designs that are even better.

As an example, an alternative single-lane system that has locks like those currently planned – but these with 4 chambers (instead of 6) and 2 tanks per chamber (instead of 3¬) – would use 45 (instead of 52) million gallons per transit. This system would not only use fewer parts and less water, it would not need a dike over geologic faults, plus it would spare Gatún Lake from becoming brackish.

However, an unexpected problem at any chamber can shut down a single-lane system.

To avoid shutdowns, a two-lane system with 8 chambers – and no tanks – that also uses 45 million gallons per transit could replace the currently planned system. The Panama Canal’s Pedro-Miguel Lock unit is an example of that system’s type of locks. Water use could be further reduced to 30 million gallons per transit by using a recent design improvement that adds 2 tanks to each unit of that system.

In either two-lane case, a dike across faults would be avoided and Gatún Lake would be protected from salt intrusion. These arrangements would result in increased canal cargo capacity, which means more growth in future business.

What, then, are the benefits gained by society and the shipping community from building a single-lane lock system that has many more components than needed – which do not improve efficiency or service, but do increase risks and costs – instead of opting for a more effective system? …None!

For special interests, however, there are many benefits… all to be paid for by society!

The building of 50% more chambers and 125% more tanks than actually needed represents a very healthy increase in profit to the lock builder. Both components are very large and expensive, and require costly culverts and valves to interconnect them. Plus, every added element adds maintenance – i.e. higher future operational expenses charged back to the customer.

Then, because the planned system uses more water, it calls for seasonally fluctuating the level of Gatún Lake over a greater range than otherwise needed to supply operating water. That, as an example, greatly fattens the dredging contracts for those who will deepen the canal’s 35 miles of channel between the Atlantic and Pacific locks. (Detrimental to the original locks, the planned increase in lake fluctuations will seasonally reduce the cargo capacity of ships transiting them.)

Furthermore, a dike between Gatún Lake and Miraflores Lake – that could rupture should a fault slip – will be very expensive to build and cannot be guaranteed. Thus, what is now planned puts both the canal and inhabited areas – like Panama City – at risk.

Society would be foolish to accept that risk, when it is completely avoidable.

Finally, given that the planned locks are to be operated with ships transiting in groups, one direction at a time, brackish water will be injected into Gatún Lake as ocean-bound ships exit the locks. This happens today, but only at Gatún Locks. (At the Pacific end, Miraflores Lake interrupts that salt-injection process.) Today’s canal system falls just short of fully mitigating the salt that intrudes.

Relative to today’s Gatún Locks, about three times more brackish water will be injected into Gatún Lake by each ship exiting the planned locks at each end of the canal.

Then, because the planned locks will use less fresh water to operate (40% of the lake-water regular lock operations use), the water in them will contain much more salt than what is in the water injected today via Gatún Locks. Given that today’s salt mitigating capacity will be reduced as more water is diverted to lock operations, Gatún Lake’s salt concentration will -- without question -- rise at a much faster rate than that of today.

Salt intrusion does not negatively affect transits. But, the publicly owned freshwater resource will be ruined as the lake’s salt concentration rises. And, it is predicted that the eradication of, or irreparable damage to, sea life along both coasts will follow.

Therefore, this expansion will be very lucrative for certain special interests at the expense of everyone else.

Posted by crucestrail at 2:18 PM