By BRIAN ROHAN19 hours ago


ISMAILIA, Egypt (AP) — Transit tolls at Egypt's Suez Canal will stay largely at their current prices this year, the authority said Wednesday, as development of a second parallel waterway proceeds on schedule.
Authority chief Mohab Mameesh said that the canal, which generates a main source of income for the Arab world's most populous country, would open its second lane as expected in August.
The project has been the focus of many hopes and attention in Egypt, where several years of tumult following a 2011 uprising have left the economy battered.
President Abdel-Fattah el-Sissi ordered a faster digging schedule at an inauguration ceremony last year, saying that the urgency of Egypt's situation meant that the project could not wait for an originally planned three-year timetable.
The canal earned a record $5.455 billion in revenue last year — its most lucrative since inauguration in 1869 — compared to $5.105 billion the previous year, the authority said.
Mameesh said the toll structure was unchanged as an incentive for ships at a time when lower oil prices could make the alternate, fuel-intense route around Africa attractive. 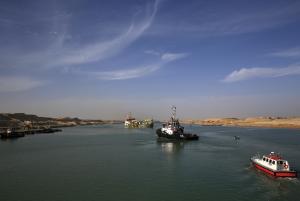 Dredger float on a new section of the Suez canal during a media tour in Ismailia, Egypt, Wednesday,  …
"The fuel price has dropped all over the world. Raising the transit toll would make it easier for ships to travel around the Cape of Good Hope," he told reporters in the canal city of Ismailia.
The only change for 2015 would be for shippers of liquefied natural gas, who will see a toll discount they had cut to 25 percent from 35 percent, he said.
The canal is one of the world's busiest water corridors and the strategic link between the Red Sea and the Mediterranean. It employs some 25,000 Egyptians.
The government has said the new canal section will shorten the waiting period from 11 to three hours, allowing two-way traffic of almost 100 ships at a time.
Mameesh said that workers had accomplished 86 percent of the new canal's dry digging and 21 percent of its dredging. Some 35 kilometers (22 miles) had been dug so far and 10 kilometers (six miles) dredged, he said, adding that the cost of the project stood at 8.2 billion.