By Simon Gardner and Elida Moreno12 hours ago

A general view of the Miraflores set of lock (top) on the Pacific side, next to the Panama Canal Expansion …
By Simon Gardner and Elida Moreno
COCOLI, Panama (Reuters) - As it enters the final stretch of a massive expansion, the Panama Canal Authority is setting its sights on an even more ambitious project worth up to $17 billion that would allow it to handle the world's biggest ships.
Workers are now installing giant, 22-story lock gates to accommodate larger "Post-Panamax" ships through the Canal, one of the world's busiest maritime routes.
The project involves building a third set of locks on the Canal. It is being headed by Italy's Salini Impregilo and Spain's Sacyr, and should open on April 1, 2016.
But Jorge Quijano, who leads the Panama Canal Authority, is already looking beyond this project to a fourth set of locks which would serve a new generation of even bigger ships that can carry 20,000 containers.
"Looking at our geology and the experience we gained with this current expansion, we estimate it's a project that could cost between $16 billion and $17 billion," he told Reuters, adding it would allow Panama to compete head-to-head with Egypt's Suez Canal.
The Panama Canal Authority has long talked about building a fourth set of locks but Quijano said it is now for the first time seriously studying the project.
He says container ship traffic through the Canal has risen around 3 to 4 percent in the last few months due to a backlog at U.S. West Coast ports, which were hit by a now-settled labor dispute disrupting trans-Pacific trade..
"It has had a positive impact for us, but the Suez Canal has been the big winner because they can handle the Post-Panamax ships," Quijano said.
If the Canal goes ahead with the project, Quijano says it could be completed within 15 years and that financing options include issuing bonds and using the Canal's own revenues.
China Harbour Engineering Company Ltd (CHEC), a subsidiary of state-owned China Communications Construction Co Ltd, has voiced interest in building and financing a fourth set of locks in Panama, and Quijano said company officials met with him this week. 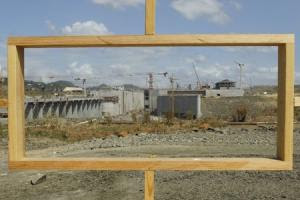 A general view of the third set of locks on the Pacific side, is seen at the Panama Canal Expansion  …
Further north in Nicaragua, a little-known Chinese businessman has vowed to build a $50 billion canal across the country to rival Panama's, although some industry experts are deeply skeptical, pointing to the high costs, environmental challenges and the firm's lack of experience in such projects.
The Panama Canal's current expansion plan was originally set at $5.25 billion but the costs rose and the administrator became locked in a dispute with building consortium Grupo Unidos Por el Canal (GUPC), which built the third set of locks. Quijano said GUPC has submitted claims totaling $2.3 billion to date.
Giuseppe Quarta, GUPC's CEO, says he is unsure whether its members would be interested in bidding to build a fourth set of locks, saying the Canal Authority has repeatedly rejected its claims in the dispute.
Quijano says the Canal has already lost around $400 million in revenue because of project delays caused by the spat.
The giant new locks sit alongside those of the existing Panama Canal and include a complex reservoir system that will empty and fill the lock chambers using gravity rather than pumps.
Sections of the 100-year-old waterway are being dredged to take ships with a greater draft.
Any new project to build a fourth set of locks will live or die by trade flows, says Maersk Line, a unit of conglomerate A.P. Moller-Maersk. It is a major customer of the Panama Canal, crossing it 300 to 350 times a year.
"The big question for any future expansion of the Panama Canal is will trade growth sustain that extra investment," said Robbert Jan van Trooijen, Maersk Line's CEO for Latin America and the Caribbean. "For me, to see any of those (mega) ships coming near Latin America, that's the very distant future."
(Editing by Kieran Murray)
Posted by crucestrail at 11:14 PM