A core sample pulled from the concrete of the Cocoli Locks where cracks and leaks have appeared does not bode well for the Panama Canal expansion project, which is on a strict deadline for completion in April 2016.
The crack and subsequent leaks appeared recently in the concrete of one of the interior chambers of the new Cocoli Locks on the Pacific side of the waterway during testing of the new locks.
According to the ACP, the crack appeared in the “step”, or sill, of lockhead 3 (LH3), dividing the middle chamber from the lower chamber of the Cocoli Lock complex.

Grupo Unidos por el Canal (GUPC), the main contractor for the Third Set of Locks project, issued a statement last Friday acknowledging the leaks, but has since gone quiet.
The Panama Canal Authority (ACP), the government agency responsible for the operation and management of the Panama Canal and the expansion project, has said that the based on preliminary information the crack is not expected to impact the opening of the new locks for commercial operations in April 2016 and that GUPC is solely responsible for the successful delivery and performance of the new locks ‘without defects’.
“GUPC has the obligation to ensure the long-term performance on all aspects of the construction of the locks and to correct this issue,” the ACP said in a statement earlier this week. “Moreover, GUPC’s contract with the ACP dictates that the group is responsible for modifications and corrections,” it added.
Neither the ACP or GUPC have gone into detail however about the scope of the issue or repairs needed. 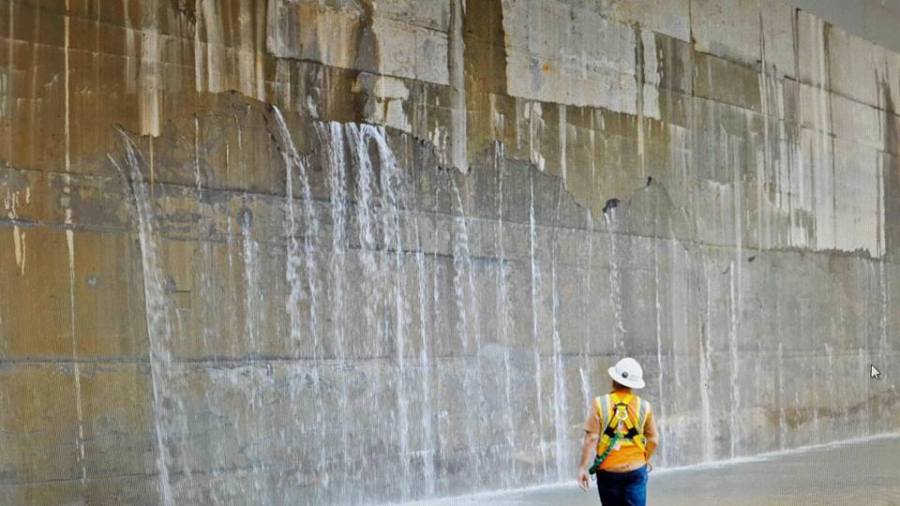 The Third Set of Locks project, the main component of the $5.25 billion expansion project, involves the construction of new, bigger lock complexes on the Atlantic and Pacific sides of the Panama Canal, which will allow larger ships to transit and effectively double the capacity of the famous waterway.
For the two new lock complexes, a total of 4.4 million cubic meters of concrete had to be poured, more than the 3.4 million cubic meters used for the current Panama Canal.

GUPC was one of three pre-qualified international consortiums bidding on the tender for the design and construction of the Third Set of Locks, a tender process that involved a thorough technical and pricing evaluation. The contract winner was selected based on the “non-negotiated best value proposal”, i.e. the one that obtained the highest combined score for their Price Proposal and Technical Proposal using a weighted model where the Technical Proposal was assigned 55 percent of the total score and the Price Proposal was assigned 45 percent of the total score.
Ultimately, GUPC was selected as the winner with the highest technical score and lowest total (fixed) price proposal at $3.221 billion. The contract for the project was awarded the contract on July 15, 2009 and work began the following month.
The opening of the expanded Panama Canal was originally scheduled for 2014 to coincide with the 100 year anniversary of the opening of the existing Panama Canal, but cost overruns and delays have pushed the opening to April 2016… at least as it stands now.
GUPC is a consortium made up of Sacyr Vallehermoso of Spain as its head, with Impregilo of Italy, Jan De Nul of Belgium and Constructura Urbana, SA (CUSA) of Panama.
Below is some video of the leaks: