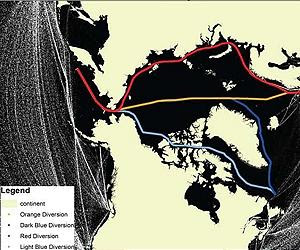 Newark DE (SPX) Nov 03, 2010
As the ice-capped Arctic Ocean warms, ship traffic will increase at the top of the world. And if the sea ice continues to decline, a new route connecting international trading partners may emerge - but not without significant repercussions to climate, according to a U.S. and Canadian research team that includes a University of Delaware scientist.

Growing Arctic ship traffic will bring with it air pollution that has the potential to accelerate climate change in the world's northern reaches. And it's more than a greenhouse gas problem - engine exhaust particles could increase warming by some 17-78 percent, the researchers say.

James J. Corbett, professor of marine science and policy at UD, is a lead author of the first geospatial approach to evaluating the potential impacts of shipping on Arctic climate. The study, "Arctic Shipping Emissions Inventories and Future Scenarios," is published in Atmospheric Chemistry and Physics.

Corbett's coauthors include Daniel A. Lack, from the National Oceanic and Atmospheric Administration (NOAA) Earth System Research Laboratory in Boulder, Colo.; James J. Winebrake, of the Rochester Institute of Technology; Susie Harder of Transport Canada in Vancouver, British Columbia; Jordan A. Silberman of GIS Consulting in Unionville, Pa.; and Maya Gold of the Canadian Coast Guard in Ottawa, Ontario.

"One of the most potent 'short-lived climate forcers' in diesel emissions is black carbon, or soot," says Corbett, who is on the faculty of UD's College of Earth, Ocean, and Environment. "Ships operating in or near the Arctic use advanced diesel engines that release black carbon into one of the most sensitive regions for climate change."

Produced by ships from the incomplete burning of marine fuel, these tiny particles of carbon act like 'heaters' because they absorb sunlight - both directly from the sun, and reflected from the surface of snow and ice. Other particles released by ship engines also rank high among important short-lived climate forcers, and this study estimates their combined global warming impact potential.

To better understand the potential impact of black carbon and other ship pollutants on climate, including carbon dioxide, methane and ozone, the research team produced high-resolution (5-kilometer-by-5-kilometer) scenarios that account for growth in shipping in the region through 2050, and also outline potential new Arctic shipping routes.

Among the research team's most significant findings:

+ A Northwest Passage and Northeast Passage through the Arctic Ocean would provide a distance savings of about 25 percent and 50 percent, respectively, with coincident time and fuel savings. However, the team says tradeoffs from the short-lived climate forcing impacts must be studied.

+ To calculate possible benefits of policy action, the study provides "maximum feasible reduction scenarios" that take into account the incorporation of emissions control technologies such as seawater scrubbers that absorb sulfur dioxide emitted during the burning of diesel fuel. Their scenario shows that with controls, the amount of Arctic black carbon from shipping can be reduced in the near term and held nearly constant through 2050.

"To understand the value of addressing short-lived climate forcers from shipping, you need to know the impacts of these emissions, the feasibility and availability of technologies that could be put in place to reduce these impacts, and then engage the policy-making community to debate the evidence and agree on a plan," Corbett notes.

"Our hope is that this study will enable better communication of emerging science with policy makers and aid the eight Arctic Council nations with climate policy."

Corbett also has led recent studies to determine the global health effects of shipping, and more recently, a comparison of the daily release of oil from the Deepwater Horizon oil spill and Americans' daily energy use.
Posted by crucestrail at 7:25 AM