Posted by crucestrail at 3:19 AM No comments:

By MICHAEL WEISSENSTEIN and LUIS MANUEL GALEANO22 hours ago

MANAGUA, Nicaragua (AP) — Six months after the Sandinista government granted a Chinese businessman a 100-year concession to build a vast canal across Nicaragua, most of the nation is in the thrall of the imagined waterway.

In the capital, Nicaraguans snap photographs of the plaster Virgin Mary perched on an altar against the backdrop of a supertanker traversing the country's biggest lake. "Virgin Mary, bless the great trans-ocean canal!" declares the government-sponsored invocation behind her.
From boardrooms in the capital to hamlets where goods move by horse cart, Nicaraguans say they are confident the $40 billion canal will become reality, lifting their country from poverty to prosperity. The national university system announced this summer that it will create majors in metallurgy and port management, as well as Chinese language classes, in service of the canal.
Warnings by legal and environmental experts that the waterway is economically unfeasible, ecologically risky and a bad deal for Nicaragua are virtually unheard in a country where President Daniel Ortega has consolidated control of every major state institution, as well as much of the media. Opposition charges that Ortega is conjuring a canal to win support for unlimited re-election are falling on deaf ears.
"The inter-ocean canal will mean great growth for Nicaragua, for the president and for the people too," Daniel Ellis, 19, an architecture student from the Atlantic coast said as he posed by another government altar celebrating the waterway.
After three days of discussion in June, the National Assembly controlled by Ortega's Sandinista party approved giving Beijing-based telecommunications CEO Wang Jing a 50-year renewable concession to build a canal more than three times the length of the Panama Canal, as well as tax-free side projects including ports on Nicaragua's Pacific and Atlantic coasts, an oil pipeline bisecting the country, a cargo railway, two free-trade zones and an international airport. 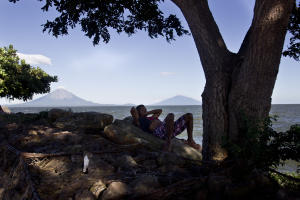 In this Dec. 5, 2013 photo, a fisherman rests by the side of Lake Nicaragua or Cocibolca Lake, a bod …
The deal pays Nicaragua $10 million a year for 10 years and gradually transfers ownership to Nicaragua, handing over 100 percent after a century. But the payments and the transfer only begin if and when the canal begins operation. Under the agreement, Wang can skip building the canal altogether but plow ahead with the other projects.
Critics fear this will leave Wang with a host of lucrative tax-free enterprises, and Nicaragua without the centerpiece of the deal or revenue from what actually gets built.
"This is an astounding giveaway," said Noel Maurer, a Harvard Business School expert on Latin American development. "It's just kind of like here's a bunch of privileges, go build something."
"This is a worse deal than the original Panama Canal deal, which was not a good deal and not a deal that Panama voluntarily signed," Maurer said.
Manuel Coronel Kautz, a veteran Sandinista leader who manages Nicaragua's Great Inter-Oceanic Canal Authority, said the government was confident the canal would "generate an enormous number of jobs for an impoverished country." 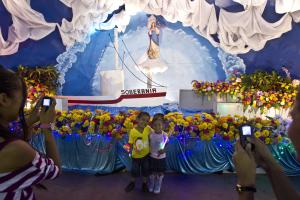 In this Dec. 4, 2013 photo, two children pose for photos in front an altar sponsored by the governme …
Chief project adviser Bill Wild said Wang is spending large amounts of his own money to dispatch dozens of Chinese, Nicaraguan and Western experts around the country to conduct environmental and geological feasibility studies to be completed in coming months.
"He's not out there just to build these sub-projects," Wild said. "The canal is his vision, there's no doubt of that if you talk to the guy."
Wild said the heavily criticized canal concession was designed in good faith to fairly compensate Wang for taking a bold financial risk.
"People expect a reasonable return, a good return," Wild said. "The return for Nicaragua in my books comes from the social benefit that comes from the existence of the canal."
The legislation allows Wang to petition the state to confiscate any land needed. It requires him to pay owners the assessed value, but much of the property outside major cities has never been officially assessed, risking what private businesses fear could be a land grab for pennies on the dollar. 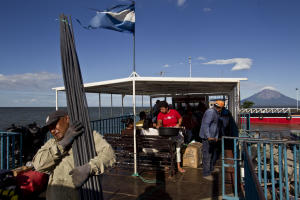 In this Dec. 5, 2013 photo, a worker carries construction material on a ferry in Lake Nicaragua or C …
Nicaragua is required to compensate Wang for legal changes that delay the canal or cause it to lose money. Compensation can come from state coffers, including the reserves of the central bank, under a waiver of Nicaragua's sovereign immunity.
Many legal and environmental experts charge that the canal deal violates national sovereignty, and construction could cause profound ecological damage to this rugged nation of lakes, cloud-wreathed volcanoes and thick tropical forest, by damming rivers, splitting ecosystems and moving untold tons of earth.
"It's basically handing over the whole country — water, air and land, without any studies," said Luis Callejas, an opposition congressman who was invited to join a 10-day trip to China sponsored by Wang in October for a group of prominent Nicaraguan businessmen and politicians.
After he announced he would present Wang with a letter decrying the secrecy and constitutional violations of the canal concession process, Callejas did not receive the promised visa to China, and the group left without him. A Sandinista lawmaker who abstained from voting in favor of the canal law was ejected from the party's congressional caucus days later.
Wild said the canal would improve Nicaragua's environment, in large part because large-scale reforestation would be needed to guarantee water to the canal. 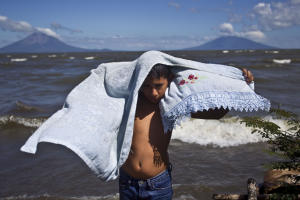 In this Dec. 5, 2013 photo, Elias Munoz, 11, dries himself after bathing in Lake Nicaragua or Lake C …
"What we're going to do will be an absolute positive for the environment," he said.
Environmentalists, academics and non-governmental organizations have filed dozens of challenges to the constitutionality of the canal deal. They expect that a Supreme Court dominated by allies of Ortega's party will dismiss the cases in coming months, removing the last legal barriers to what some portray as a gambit to burnish Ortega's popularity ahead of Nicaragua's 2016 presidential elections.
The Sandinistas last month proposed a set of constitutional changes that would allow Ortega to run for unlimited re-election. The reforms, approved Tuesday in the first of two required votes, would also write the canal laws into the constitution.
The canal is "a personal family project about President Ortega maintaining power through a megaproject that's generating illusions of profits among the people," said Manuel Ortega Hegg, a sociology professor at the Central American University in the capital, who is not related to the president.
Critics say that regardless of that happens in Nicaragua, global trade will not support a second Central American canal, particularly as the Panama Canal completes a massive expansion more than doubling the size of the ships it serves. Shipping experts say that the proposed canal, with an original price tag of $40 billion, would have to earn $1 billion annually to turn a profit, meaning it would have to immediately draw half of Panama's current ship traffic. 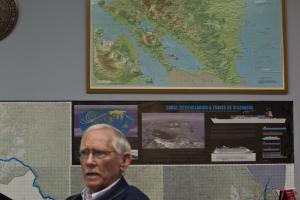 In this Dec. 6, 2013 photo, Manuel Coronel Kautz, a veteran Sandinista and now president of the coun …
And the construction costs may be climbing. Cesar Zamora, a power company executive who traveled to China in October, said Wang Jing's company informed the group that the estimated price of the canal already has risen to $50 billion because of unspecified environmental costs.
"What Daniel Ortega is doing is selling dreams to Nicaraguans," said Francisco Aguirre Sacasa, who served as ambassador to Washington and as foreign minister before Ortega returned to power in 2011. "I would love it if Nicaragua had a canal but I just don't see it in the cards right now."
Wang and other Nicaraguan canal boosters say they are confident there is demand for a waterway accommodating larger ships than even the expanded Panama Canal.
"There seems to be a very strong business case," Wild said. "I've seen nothing that changes my view that world trade can handle another canal."
Nicaragua was long considered a site for a trans-ocean canal, coming under repeated consideration by the U.S. in the 19th century before Washington decided on Panama. Nicaragua has watched enviously as the Panama Canal fueled growth virtually unmatched in the region, as Nicaragua struggles to move 40 percent of its 6 million people out of poverty. 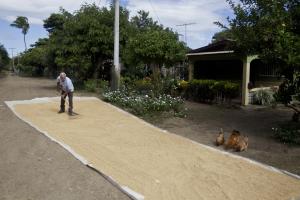 In this Dec. 5, 2013 photo, Rodolfo Molina, an 81-year-old retired mechanic, dries rice for storage, …
Ortega's advisers have projected construction on the canal could begin next year and take five or six years to complete. They say it could more than triple Nicaragua's roughly 5 percent growth rate by 2015 and double its $10 billion GDP by 2018.
Advocates say complaints about the terms of the concession are motivated by opposition to Ortega, who has been pushing to bring private investment to the country despite his leftist roots. That push has become more urgent in the face of waning aid from Venezuela, a socialist patron facing its own economic struggles.
"This is a project that's been waiting for centuries and that's why we're interested in doing it as soon as possible," said Edwin Castro, a ruling-party congressman who voted for the canal concession law. "There's no unconstitutionality. It's political attacks from those who don't want Nicaragua to move forward."
Wang's previous venture, the telecommunications company Xinwei, has boasted it has orchestrated an array of deals worth more than $5 billion over the last three years but an examination of those claims by The Associated Press showed that Xinwei's promises to build revolutionary new telecom networks had yet to materialize and deals with local partners were marred by false starts and poor performance.
Wang, who announced last week he will spearhead a $3 billion joint venture to construct a deep-water port and refurbish the Sevastopol port on Ukraine's Crimean Peninsula, has told the AP that he is proud of his record, and that his plans to raise $8 billion by year's end in the first phase of the canal's financing are going "smoothly." 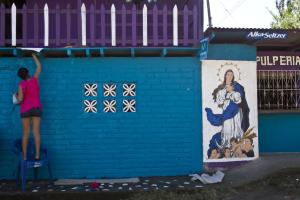 In this Dec. 5, 2013 photo, a woman paints the front of her house next to a painting of the Virgin M …
Many in Nicaragua, from wealthy businessmen to struggling members of the working poor, care little about criticism of the canal, saying it will be worth all the government concessions if it brings badly needed jobs.
But there is deep concern in the hamlet of La Virgen, a string of several dozen well-kept homes clustered along the shores of Lake Nicaragua near the mouth of the Lajas River, about two hours' south of the capital. It is a spot singled out on planning maps as a site where container ships would exit the enormous freshwater inland sea that covers much of western Nicaragua, and steam on toward the Pacific.
The town sits half a mile from the mouth of the river, a sandy crescent bay where hundreds of snow-white egrets preen and bathe in a silence broken only by the crash of waves against the shore and the rustling of trees along the riverbank.
On a recent afternoon, Rodolfo Molina, an 81-year-old retired mechanic, dried rice for storage, raking it onto a plastic sheet in front of the home where he has lived for 40 years.
He said it is almost certain he and his neighbors will be forced to relocate if the canal is built.
"It can bring jobs," he said, squinting into the sun, "but it also could bring trouble."
Back in the capital, Geomara Alvarez, a 27-year-old cell-phone accessory vendor wearing a rosary over her purple t-shirt and jeans, said her country's future lay in the construction of the canal.
"The canal will change the face of my country, my poor Nicaragua that has suffered so much," she said. "God wants it to be so."
_____
Follow Michael Weissenstein on Twitter: https://twitter.com/mweissenstein
Posted by crucestrail at 4:17 AM No comments: